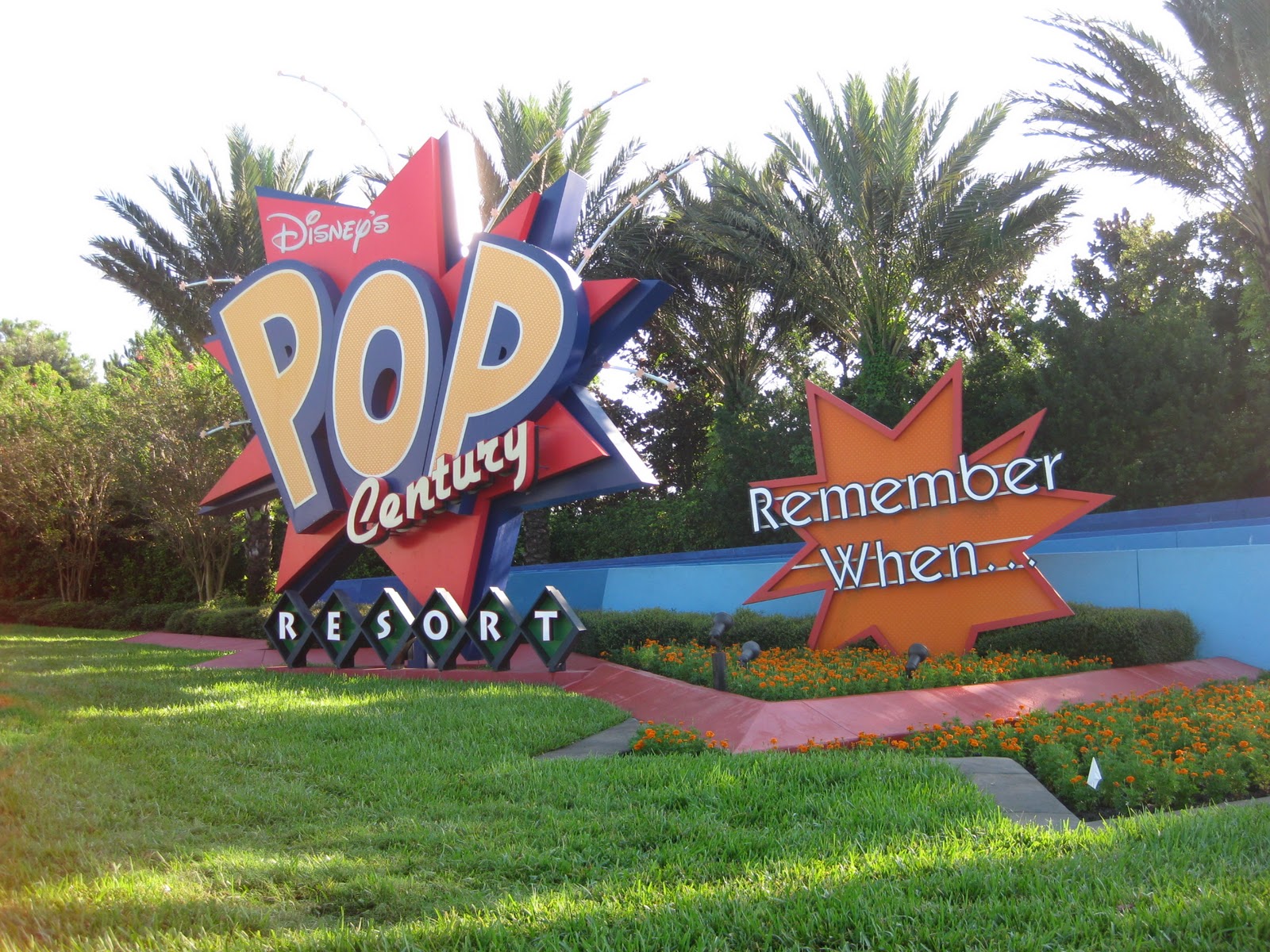 Disney's Pop Century Resort has become my favorite value resort at Walt Disney World.  I love the theming and the location near Hollywood Studios.  It doesn't seem as far away as the other Value Resorts (All Stars).  I also like that it has it's own bus system.  In the past all three of the All Star resorts shared a bus (however, I've heard that has changed in recent years).  We were always standing in line for a bus or standing on a crowded bus to get to and from the resort.  Not so with Pop Century. 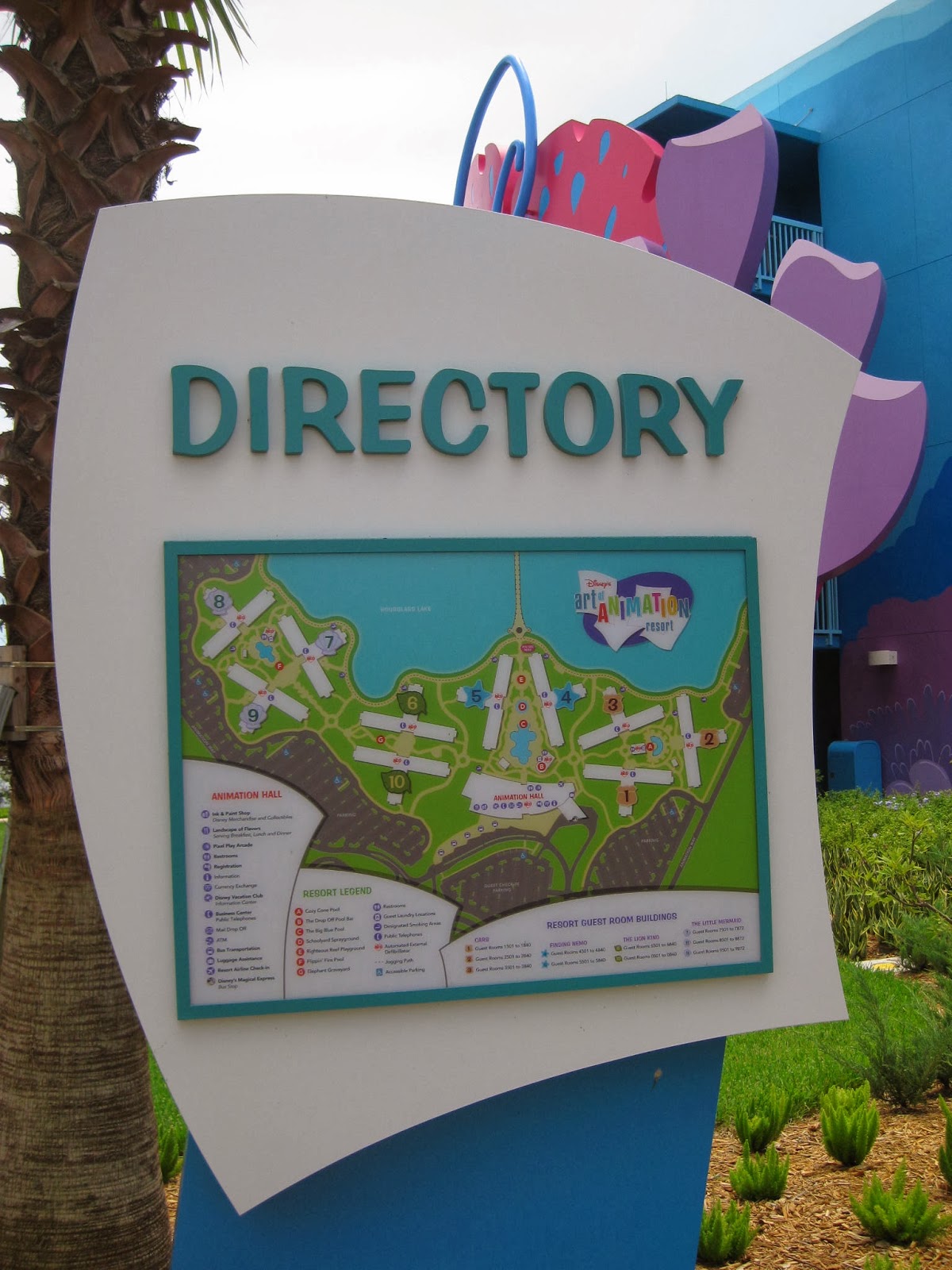 "Pop" opened in December of 2003.  What we know today as Pop Century was originally going to be the first phase known as the "Classic Years" covering the 1950's-1990's.  Phase two, the "Legendary Years," was going to be constructed across the bridge which would represent the 1900's-1940's.  Phase two was changed in 2011 from the "Legendary Years" to what we now know as Disney's Art of Animation Resort. 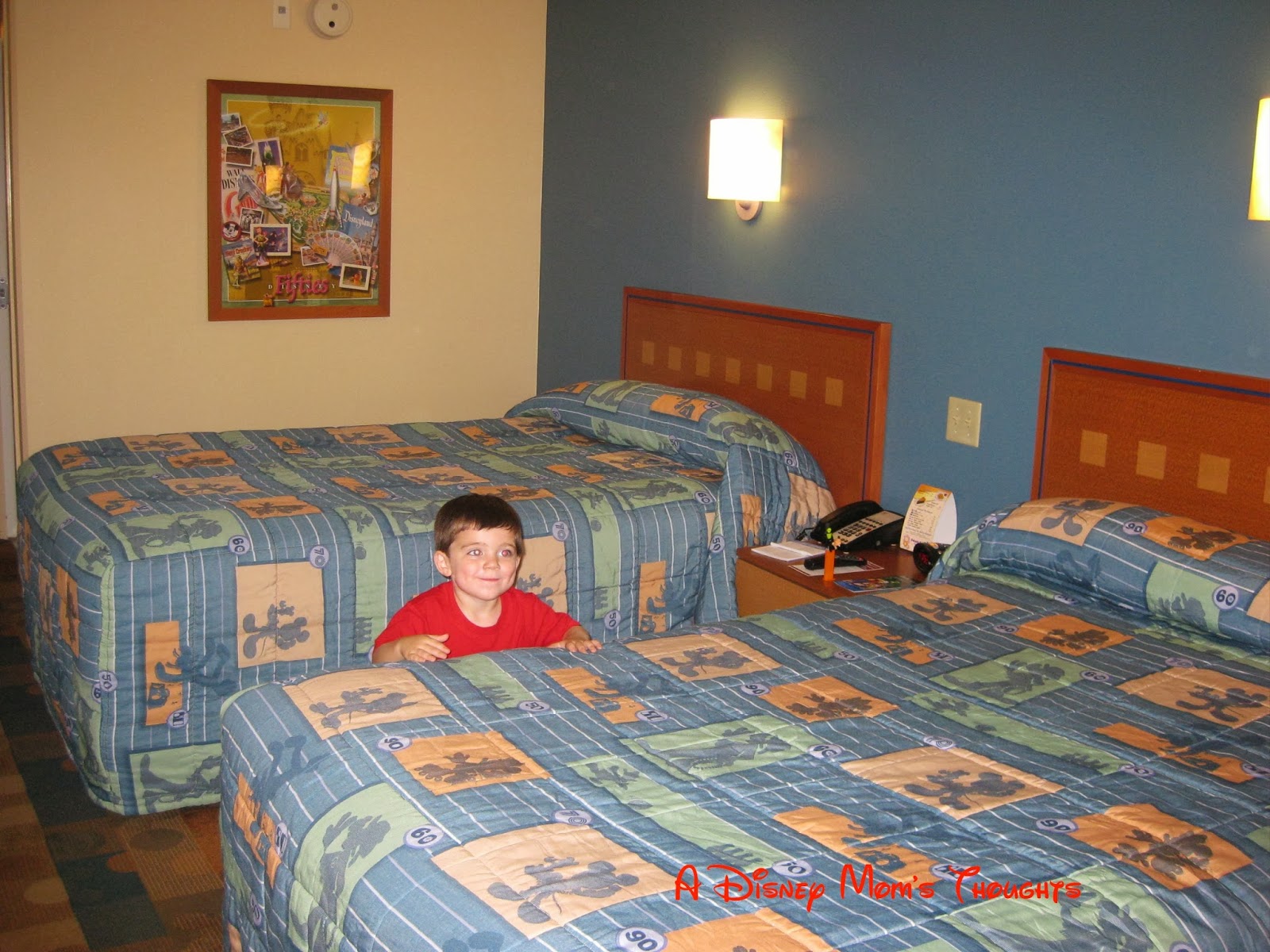 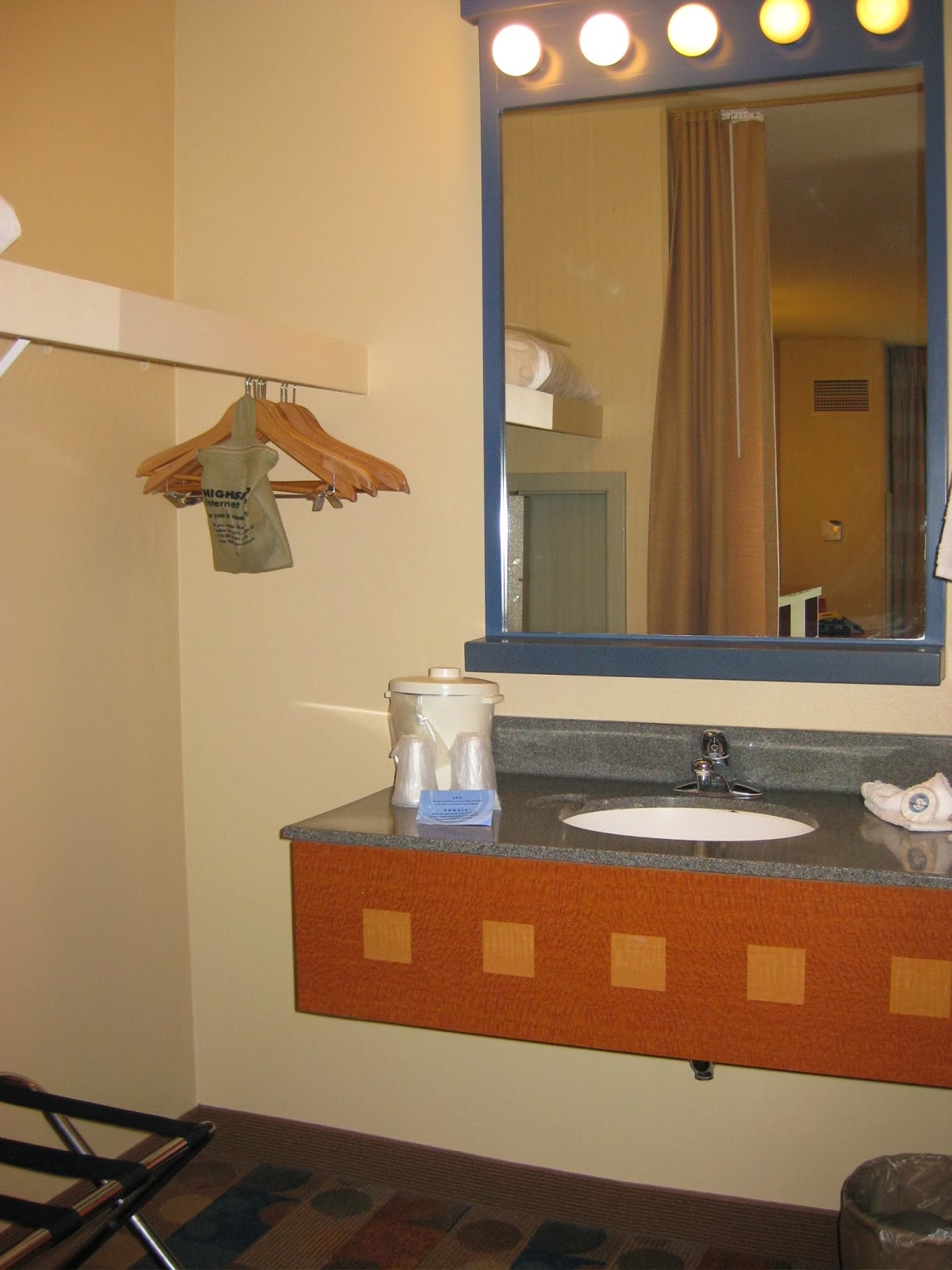 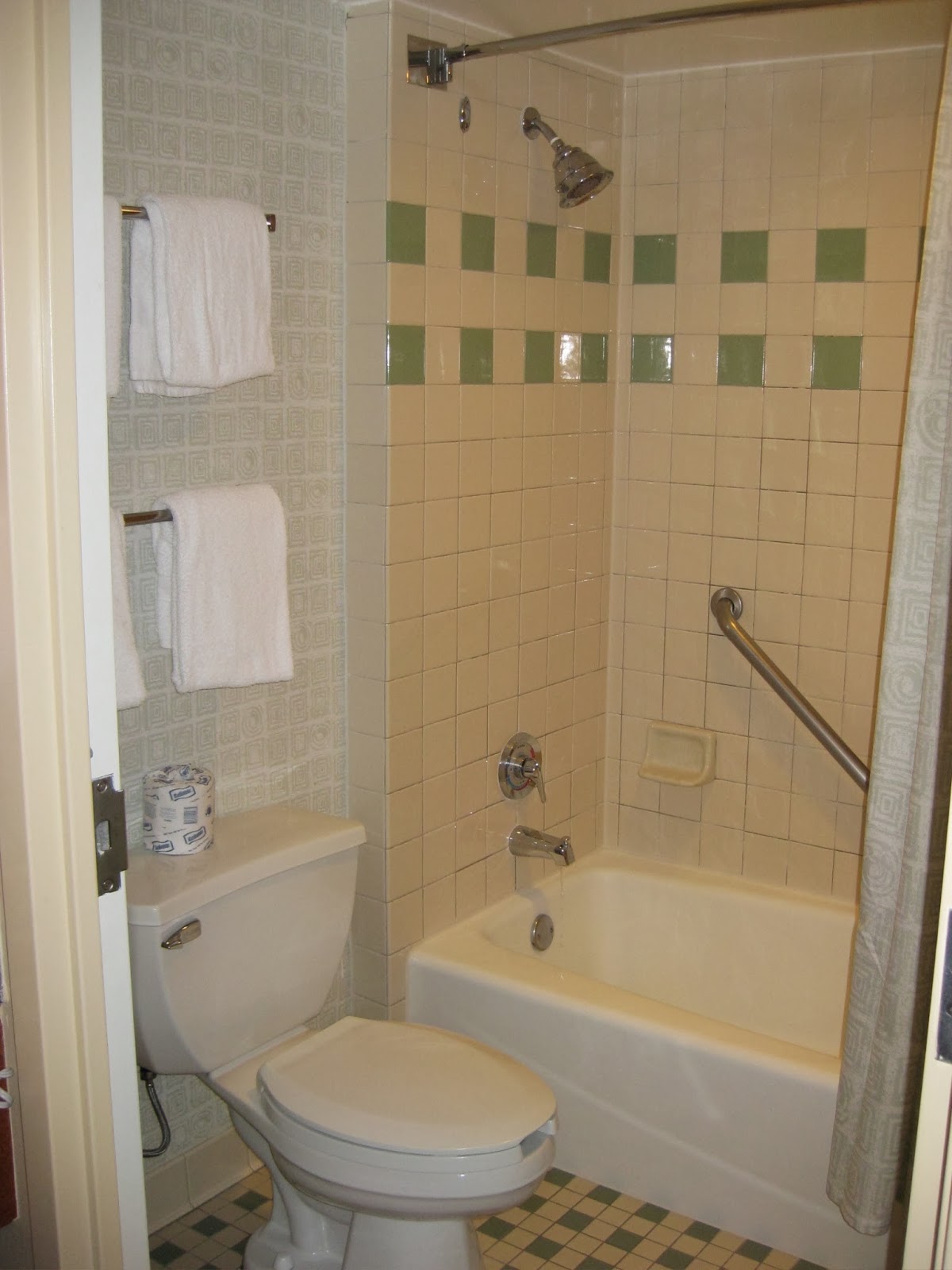 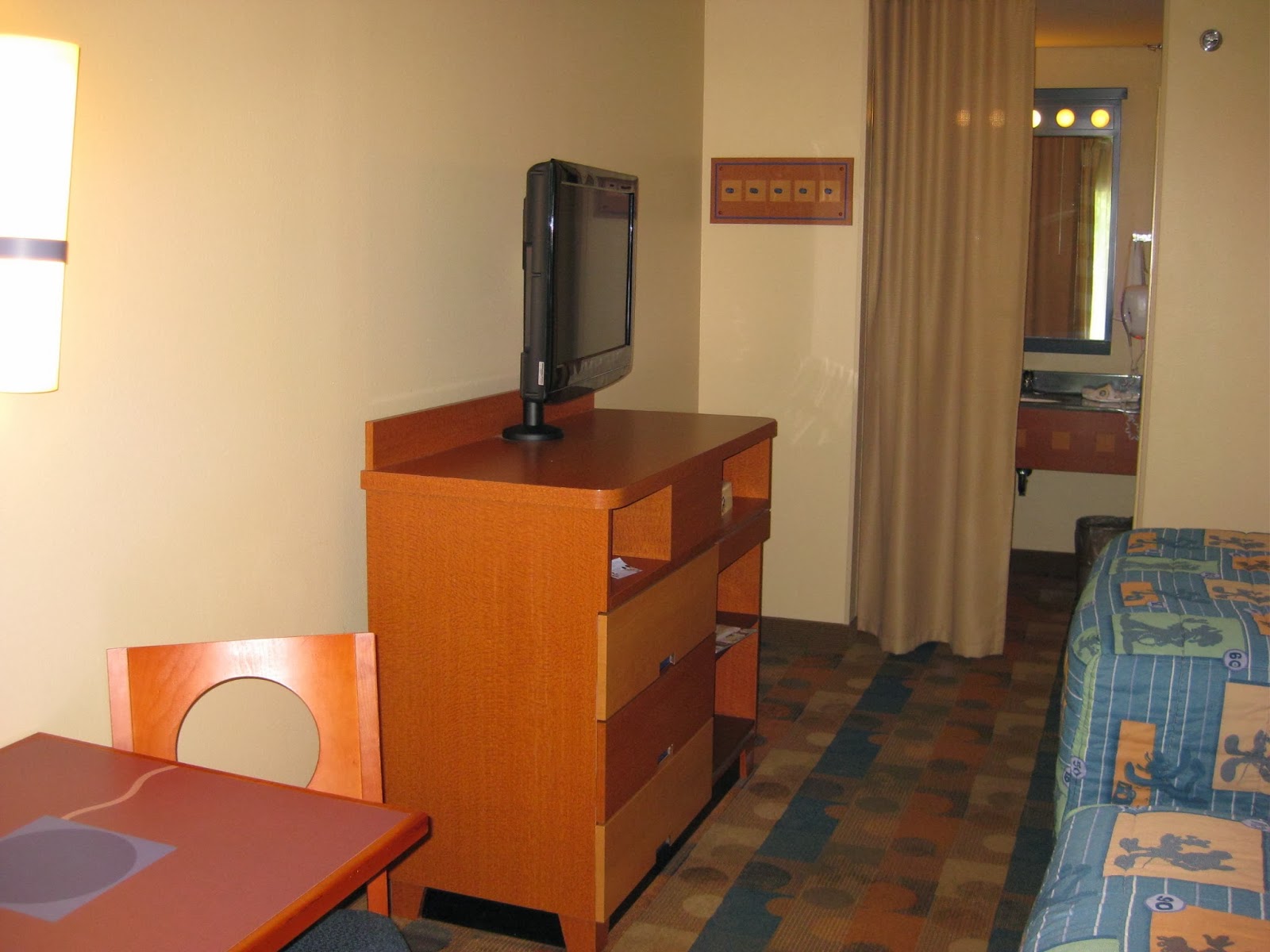 Pop Century has 2,280 rooms in five different buildings: 1950's, 1960's, 1970's, 1980's and 1990's.  Each room is 260 square feet and has either two double beds or one king size bed.  You will also find a small table with 2 chairs, dresser, and bed side table.  There is a vanity area with a sink and space for hanging clothes.  Off of the vanity area is a bathroom with a tub/ shower and toilet.  In each room you will find a flat screen TV, Wi-Fi, in room wall safe, iron/ ironing board, mini fridge and a telephone.  There are also rooms available for guests with disabilities.  Bed rails and portable cribs are available upon request. 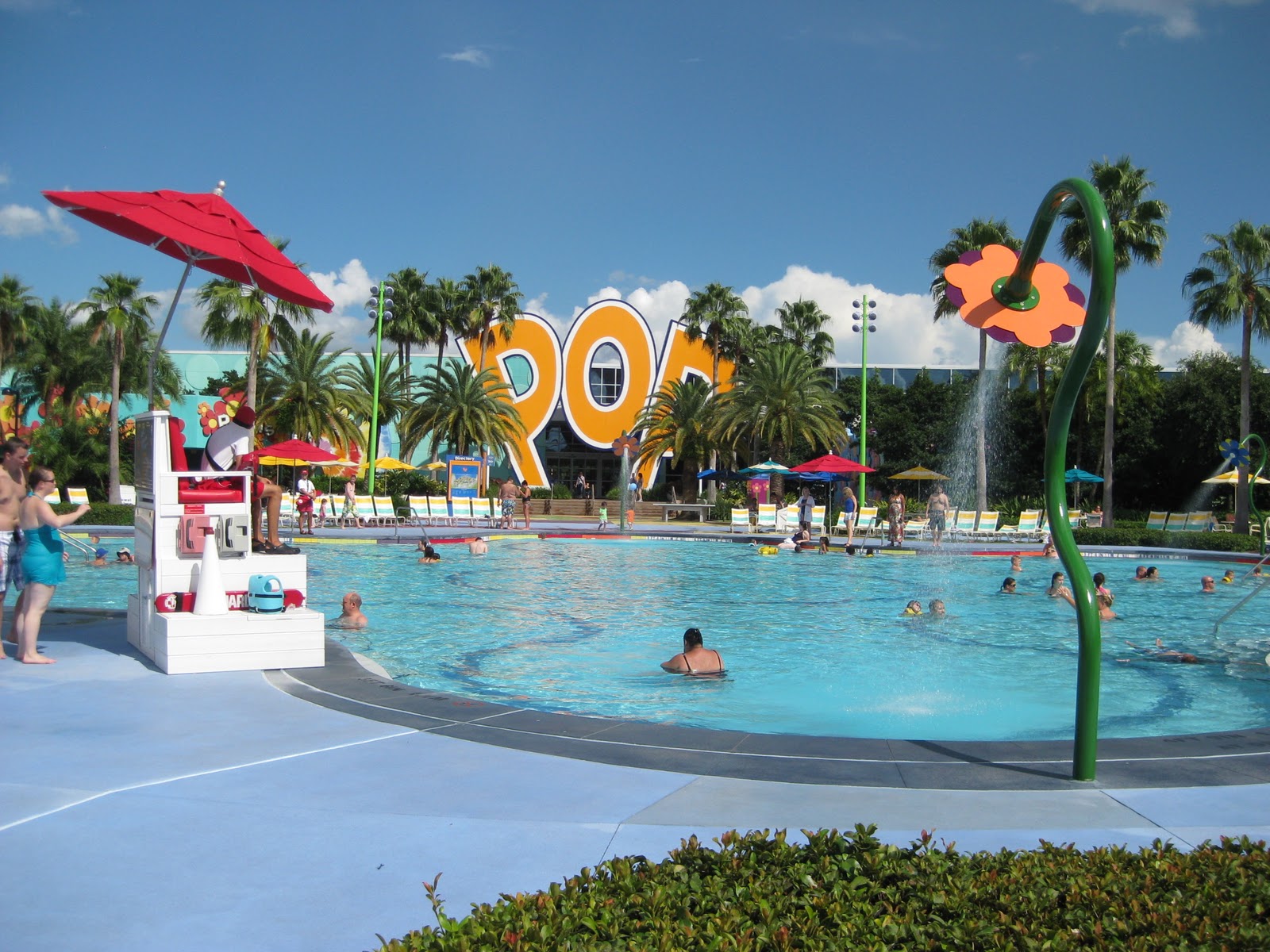 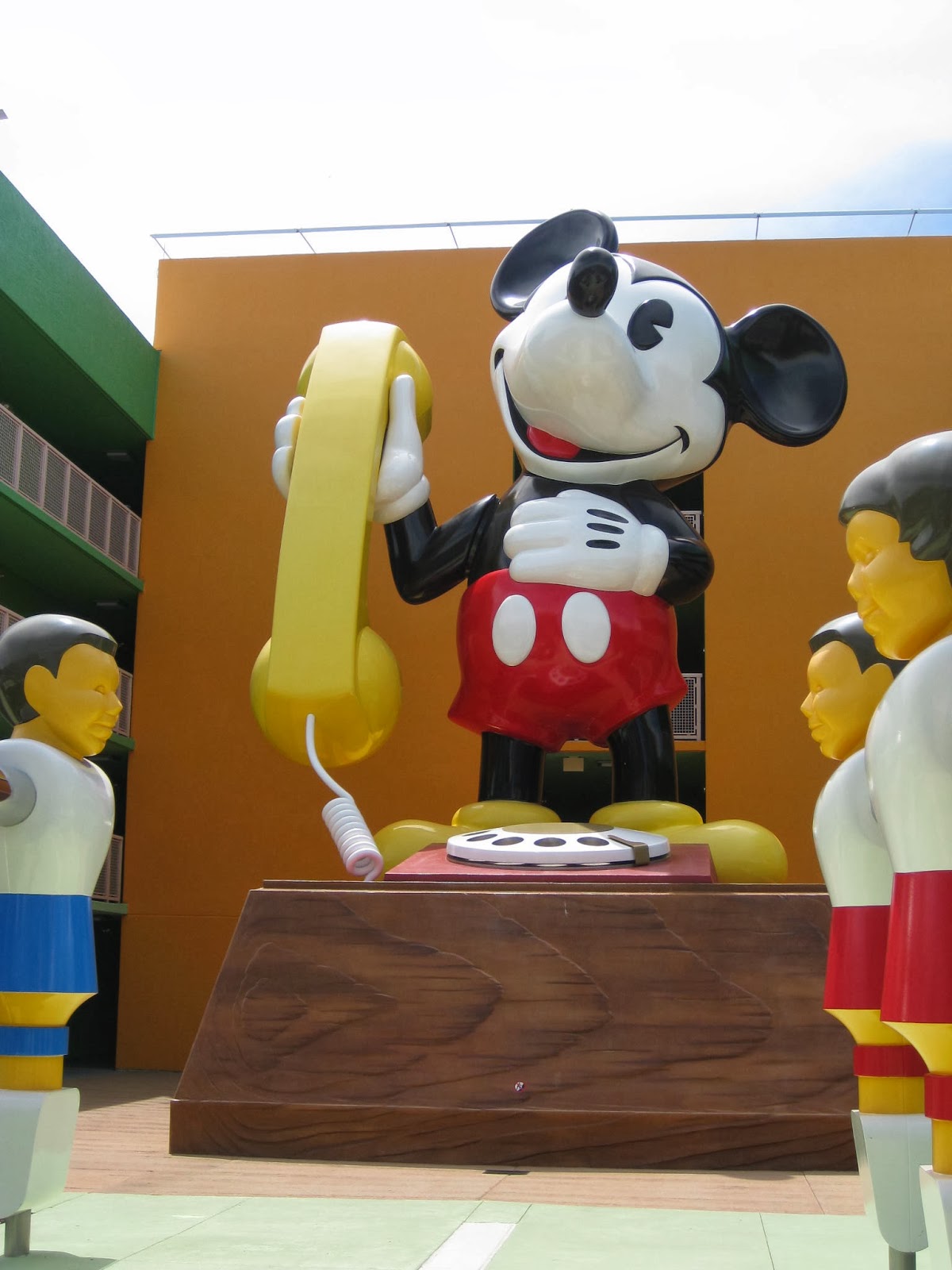 The five buildings represent the last five decades in the 1900's.  The 1950's building features jukeboxes, dancers at a sock hop and a bowling pin shaped pool.  Oversized Lady and The Tramp are located in the courtyard.  The 1960's building is all about psychedelic tie dye!  You'll find oversized yo-yos, play-doh creations and Baloo and Mowgli from the Jungle Book.  The "Hippy Dippy Pool" which is flower shaped is in the center of this area.  The 1970's building features a huge Big Wheel, Mickey Mouse rotary phone, eight track tapes and fooseball players.  The 1980's building had 40 feet tall Rubik's cubes, a walkman with headphones and a computer shaped pool.  In the 1990's area, you'll find a cell phone and giant laptop computer. 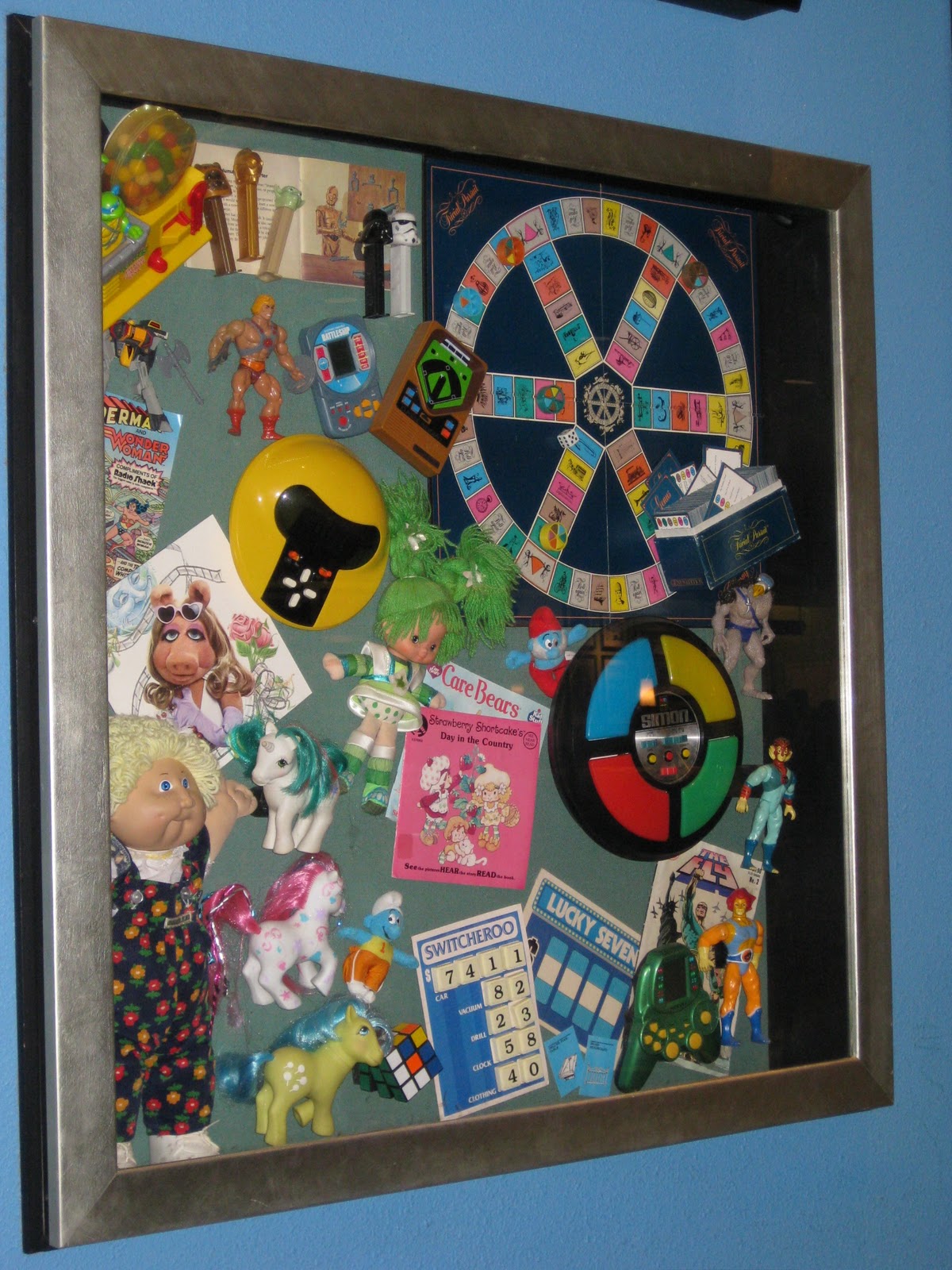 In Classic Hall, you can check in, visit the food court's 5 areas (Bakery & Cafe, Market, Grill, East Meets West, and Pizza & Pasta), shop in the gift shop, and play video games in the "Fast Forward" arcade.  Pizza delivery is also an option for late night snacks!  You can also see shadow box displays (above) in the lobby of classic games and toys from each decade represented in the buildings (1950's-1990's). 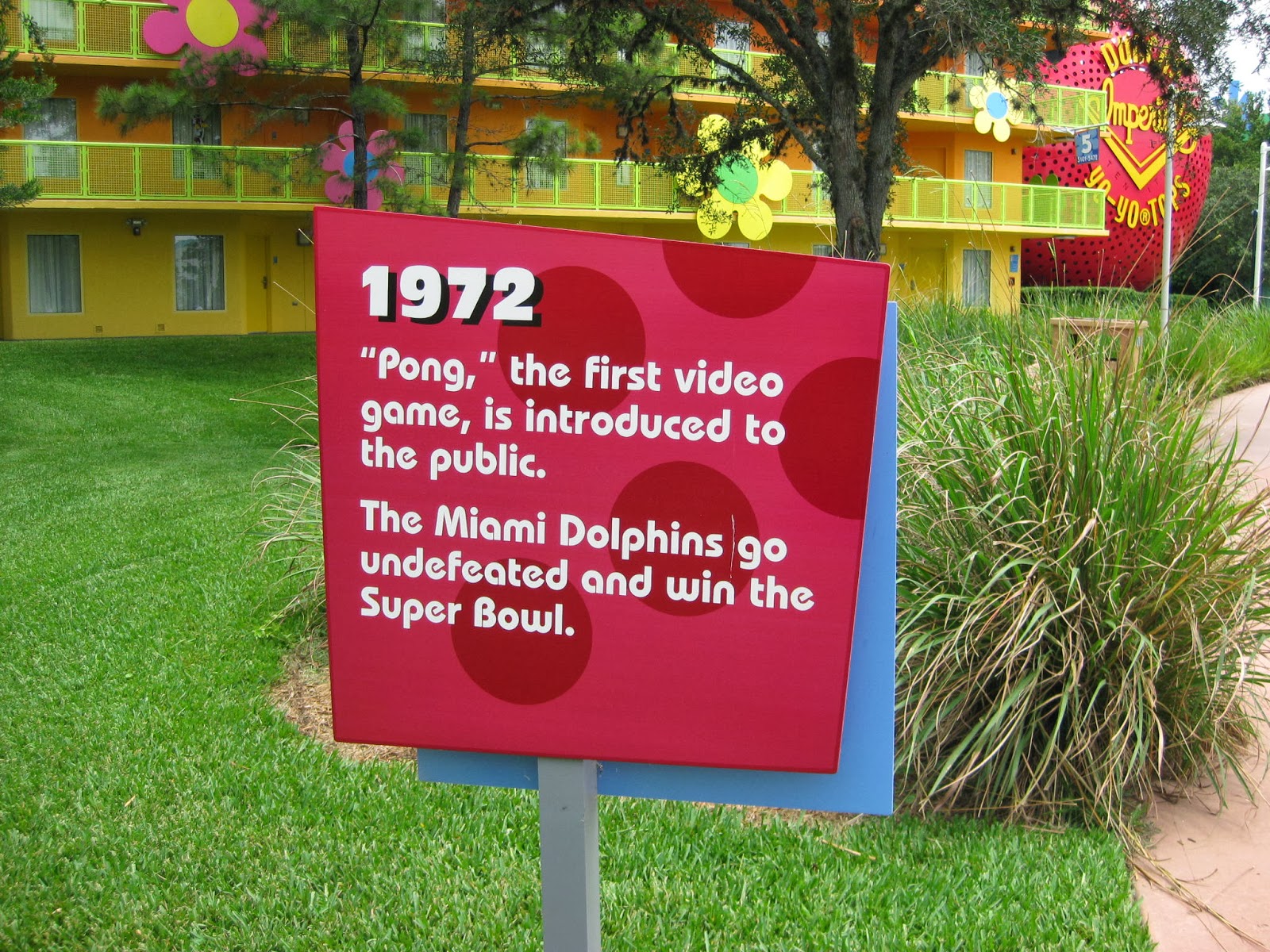 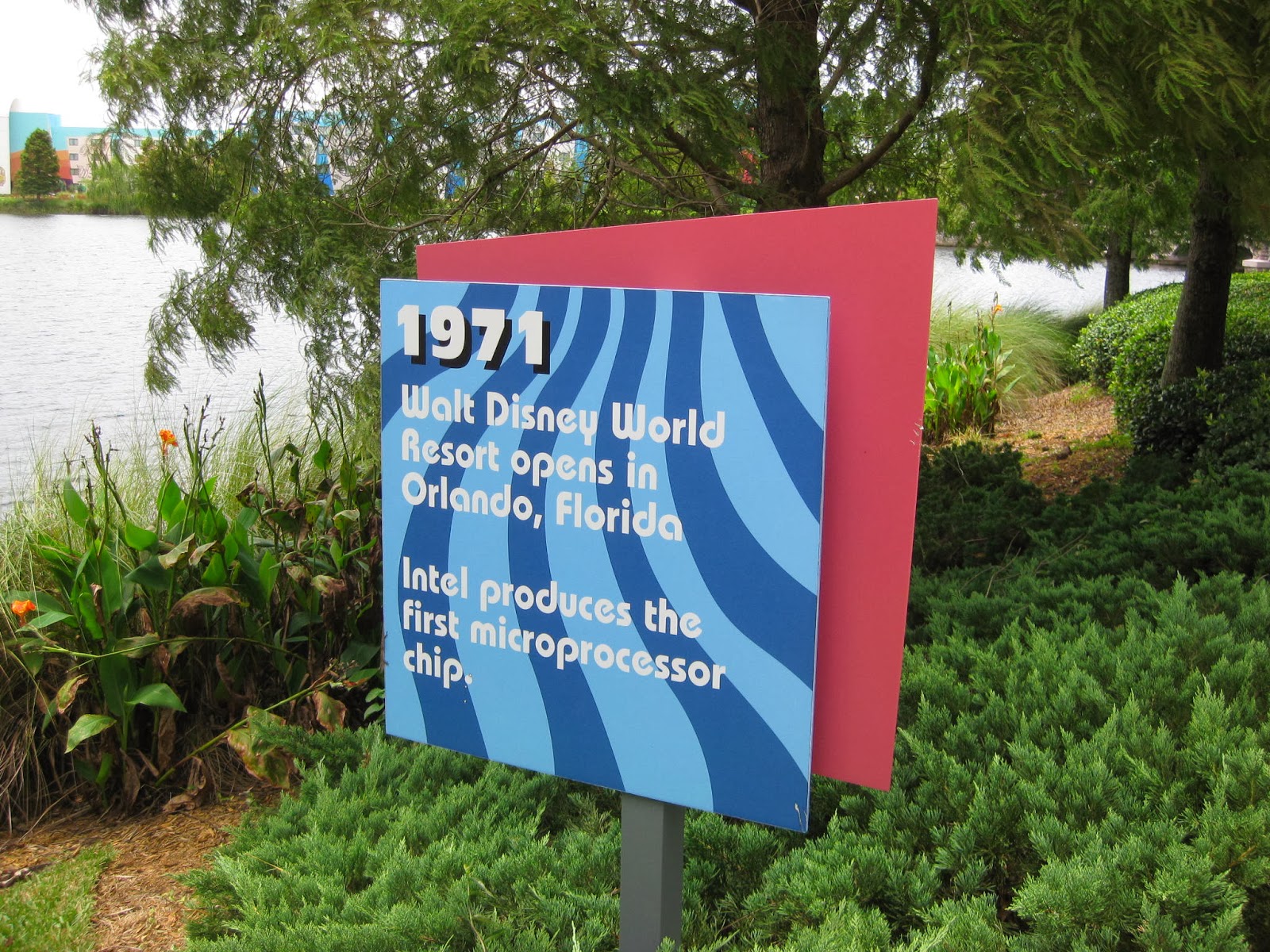 If you remember any of these 5 decades, you'll love this resort!  Throughout the resort you can read trivia related to the different decades and laugh about your own memories surrounding the giant icons displayed!