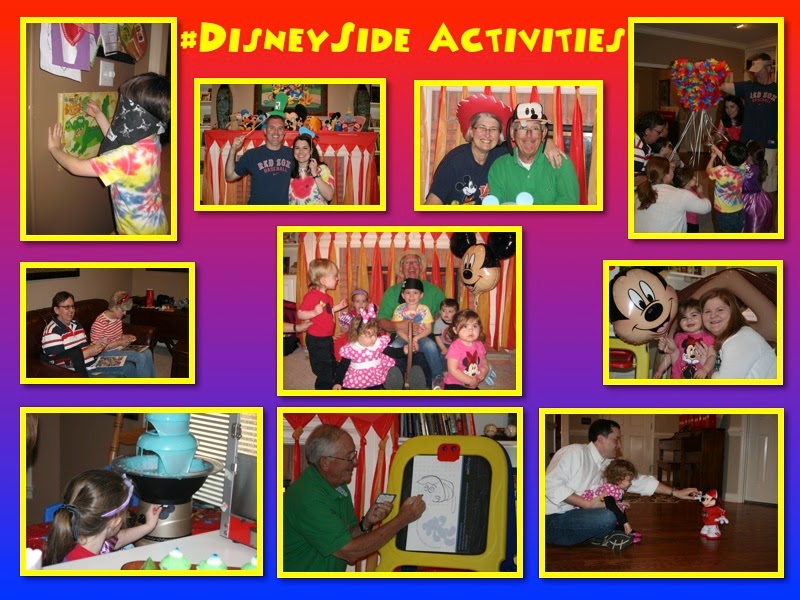 We had so much fun at our #DisneySide @Home Celebration!  With 2 kids and 4 toddlers how could there not be fun?!?! 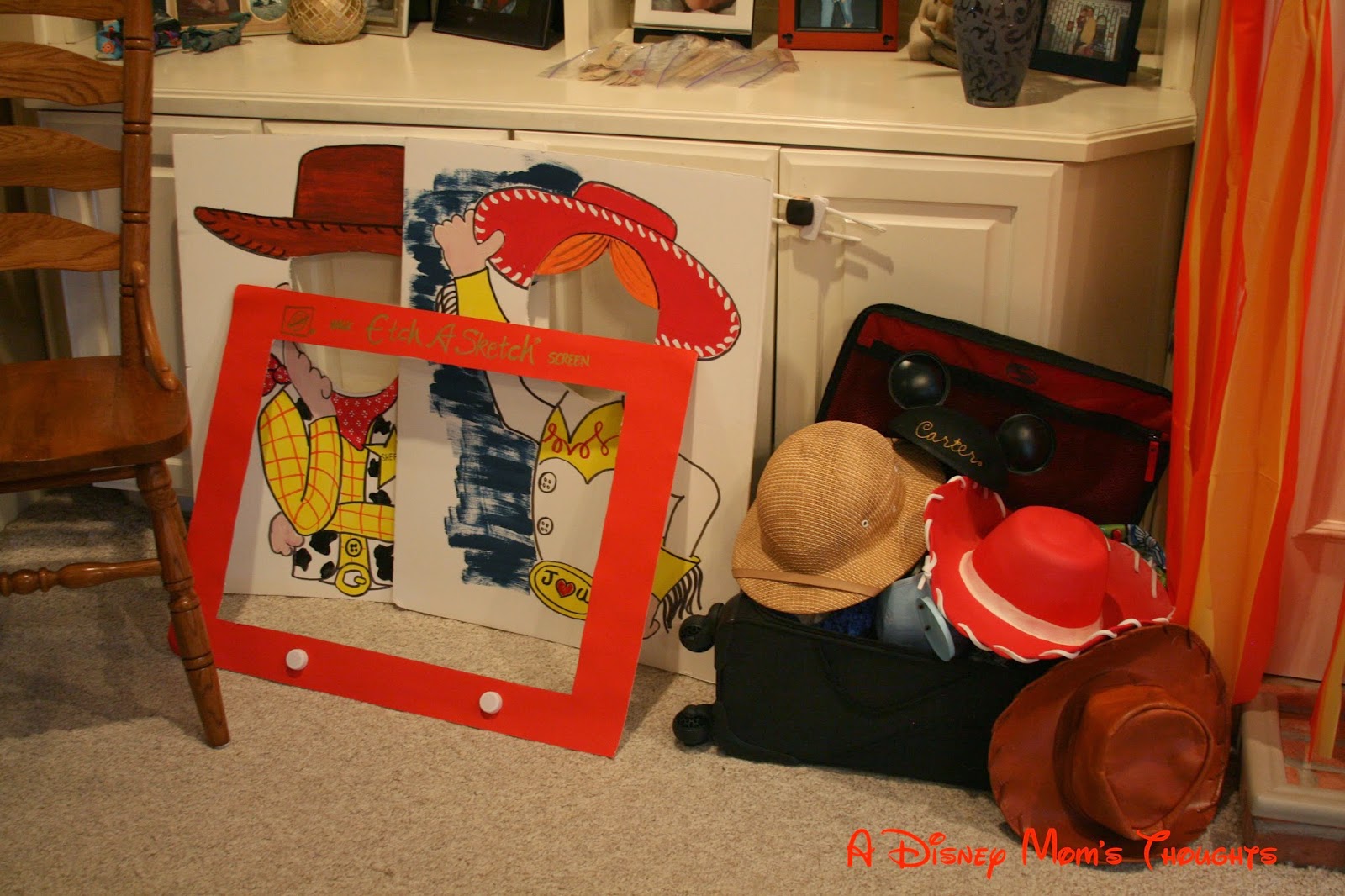 The first part of our afternoon consisted of a photo booth.  I had decorated our fireplace with lots of Disney plush characters and hung a red and yellow plastic table cloth in front of the fire place.  I cut the table cloths into strips and tied a loose knot in the top.  This was our "backdrop."  I found some cute photo props from Etsy for everyone to use and added a lot of our own Disney hats, ears, props, and costumes.  We had at least 5 pair of Mickey ears, a Jungle Cruise pith helmet from the early '80s, a Sorcerer Mickey hat, a Buzz Lightyear costume, Woody & Jessie hats and cut outs, a Frontierland coonskin cap, a Jake sword & pirate hat, and an Etch A Sketch frame.  There were plenty of props! 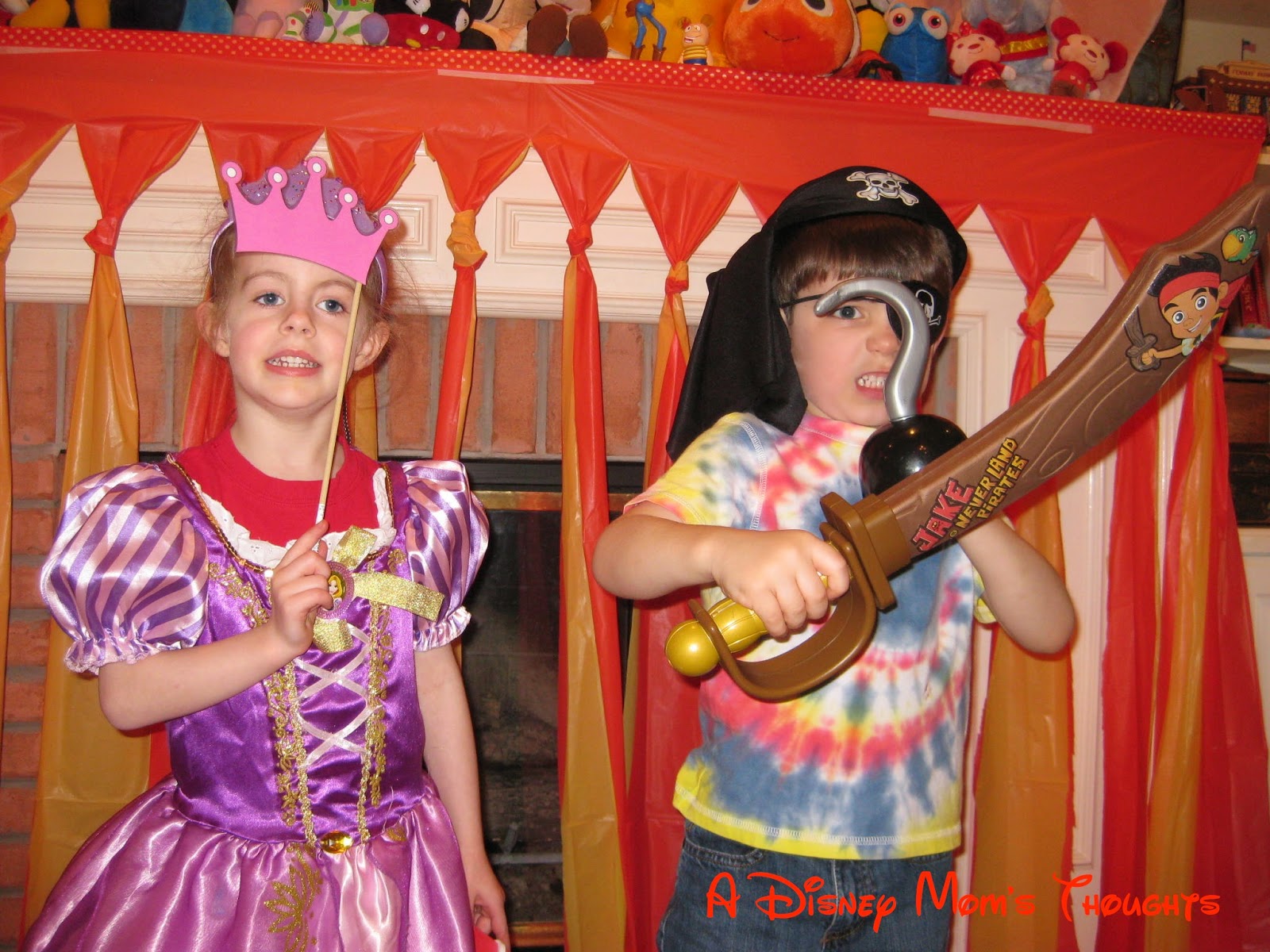 After we spent some time taking photos, it was time to eat!  Several of the kids were hungry and wanted to get their grubby paws on the sweets!  You can read more about all the Magic Kingdom attraction themed foods here.

Following all the snacks it was time to play!  First, we played Bingo which was included in our party packs.  Everyone had a great time with this game.  I gave out Mickey or Princess castle suckers to all the winners!  After Bingo, we played Pictionary.  My dad is an artist, so he drew Disney characters on the runDisney cheer cards sent to us in our planning kit.  The kids had a great time guessing the characters.  I think the best game was "Name that Tune."  Actually it was Name that Movie!  I played a tune and they had to tell me the Disney movie or cartoon it came from.  EVERYONE knew Mickey Mouse Clubhouse!  The favorite was the throwback tunes of "Ballad of Davy Crocket" and "Ducktales!" 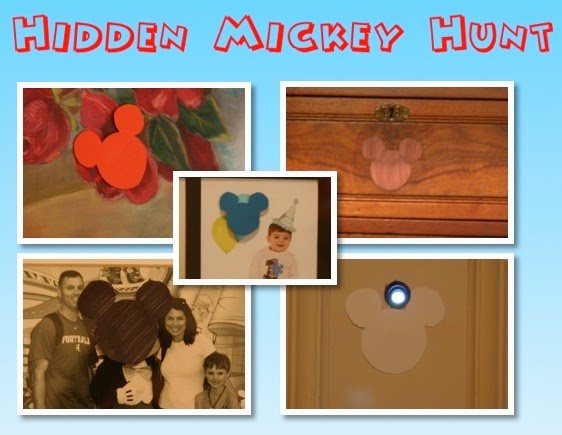 While the little ones were playing in the blow up log cabin- which we pretended was a part of Tom Sawyer Island- the big kids went on a Hidden Mickey hunt throughout the house.  I cut out different sizes of Mickey heads on colored and white paper.  Some of the white heads were colored with Sharpie markers to match the picture or furniture they were hiding on.  This was quite a hit with the kids!
To end our celebration we had a Pull String Mickey Pinata (directions coming soon!).   I spent several nights making this and it didn't even work right!!  I ended up having to stick my hands up the bottom to make the candy fall out!  Oh well, the kids still loved it and the adults just laughed at me. :)
There were several other things I had planned that we just didn't have time to do!  I had Mickey and Minnie popsicle stick puzzles and coloring sheets from Spoonful ready for the kids to do while we waited on everyone to arrive.  They ended up playing so well with each other, we didn't need to use them.  I had also intended to have the kids decorate Mickey shaped cookies, but completely forgot about them when they weren't sitting on the main food table.  We also had a story ready to read where the guests would act it out using the photo props.  It was a fun story I wrote about Mickey celebrating his Birthday in the Magic Kingdom with his character friends.  Oh well.... maybe next time!  We ran out of time and did not play "Pin the Tail on Tic Toc Crock."  This was a last minute decision to include after our "Soft Opening Party."  C-man insisted we have some sort of "Pin the Tail" game and insisted we NOT play the trivia game.  He did not enjoy that during our first party, so we omitted it from the real one.

Posted by adisneymomsthoughts at 4:51 PM