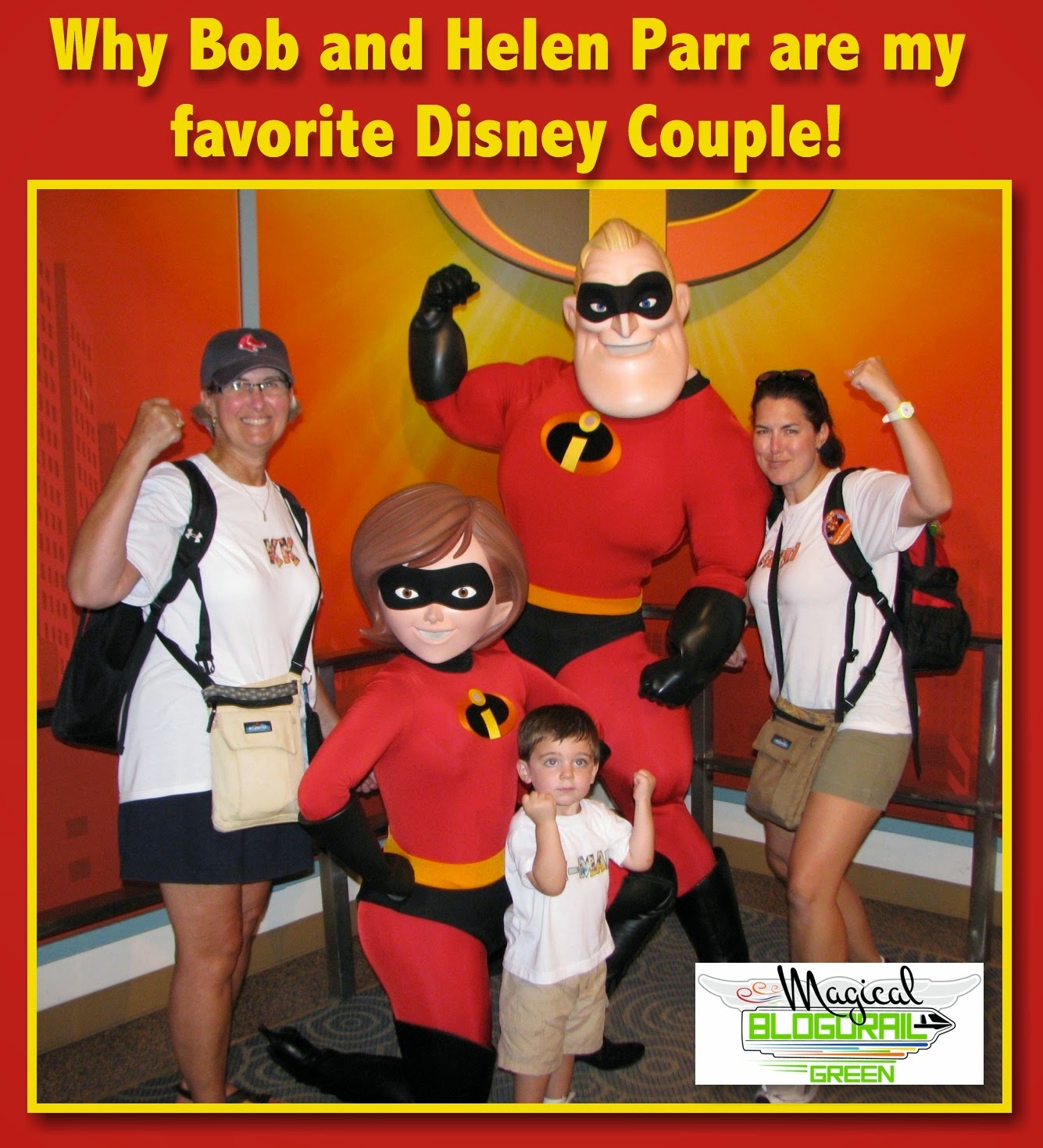 Welcome to the first stop aboard Magical Blogorail Green. Enjoy the ride as we share our ideal Disney couple or the couple we relate to the most.

There are so many fabulous Disney couples out there.  I have a lot of favorites based on story line, a happy ending, a great scene or just because "I like them!"  But when I started thinking about who I related to the most, it got a bit harder.  I thought about several couples and even looked back at the Magical Blogorail's Favorite Disney Couples Series.  But it wasn't until I looked through our collection of Disney movies that I realized which couple I related to the most... 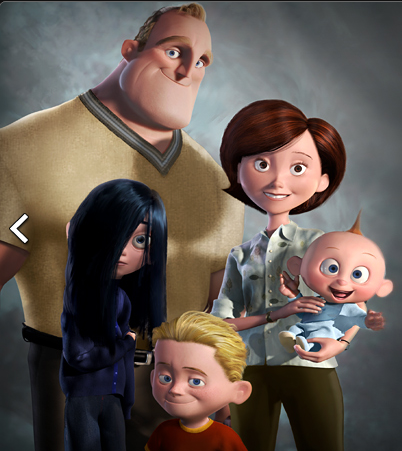 In the movie, The Incredibles, Bob and Helen fell in love when they were "practicing" Superheroes.  Soon after they were married, the US Government outlawed "Supers" and it was illegal for Mr. Incredible and Elastigirl to be Superheroes.   This resulted in them being regular US citizens known as Bob and Helen Parr.  Bob worked as an insurance salesman while Helen stayed home with their three kids, Violet, Dash and Jack-Jack.  By the end of the movie, Bob and Helen are able to be Mr. Incredible and Elastigirl again, along with their children possessing their own superpowers: Violet can produce force-fields and become invisible, Dash has the ability to run as fast as lightning, and Jack-Jack can transform into other things such as fire, lead and monsters.

When looking at this family's superpowers, I can totally relate!   Here is a quote from the Pixar web site:

"The Parr family's superpowers were based on their personalities.  As a dad, Bob had to be the strong one.  Mom Helen had to handle being pulled in all directions.  Violet, the insecure teen, doesn't want people to look at her.  Dash represents a typical hyperactive boy.  And baby Jack-Jack is all about undiscovered potential."

I know most dads try to be the "strong one."  That is true at our house.  Most moms feel they are being pulled in all directions- true again.  As for the kids, our 13 year old, JAG, is not insecure, but few teens want too much attention on them.  C-man is very full of energy, like Dash, but not quite hyperactive.  And yes, Big E is still a toddler and his potential is being discovered daily!

While the Parr's have problems, like every couple or family in real life, they still place a huge importance on family.  In The Incredibles, Bob finally realizes after almost losing his family, that his real source of power comes from his extraordinary family.  My family is the most important thing on this Earth to me.  My husband and kids are my daily source of power and the things that keep me going day to day.

At the end of the movie, there is a dialog between Mr. Incredible and Elastigirl.  Bob, Mr. Incredible, wants Helen, Elastigirl, to wait with the kids and stay hidden while he goes in to fight the bad guy.  Elasitgirl's response is, "And I'm telling you, not a chance.  You're my husband.  I'm with you... for better or worse."   After some arguing, Mr. Incredible finally admits he doesn't want his wife or family to help him fight because he's not strong enough to handle the pain of losing his family.  Her response is, "If we work together, you won't have to be."

I love this dialog!  It's so true.  When couples or families work together for better or worse, you don't have to be "strong enough."  It's this reminder from Bob and Helen that makes me relate to them the most.  Our relationship is about working together, being a team and sticking with it for better or worse!

Thank you for joining me today. Your next stop on the Magical Blogorail Loop is Heidi's Head.