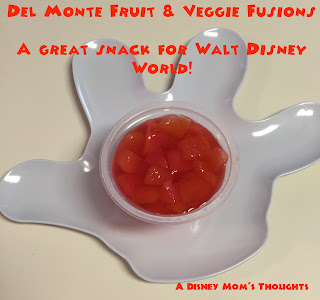 When school started in August, I was asked to review the new Del Monte Fruit & Veggie Fusions.  However, when my sample arrived, the box had apparently been on a rough ride!  My samples were busted and the cardboard box was full of peach juice and squished peaches.  I was sad that I couldn't try this new snack! Del Monte Fruit & Veggie Fusions is a blend of fruit in a lightly sweetened vegetable and fruit juice that equals one combined serving of fruit and vegetables in each cup (contains 1 serving (1/2 cup) that is 75% fruit and 25% vegetables, per USDA Nutrient Data).

I immediately started looking for a replacement at our local grocery stores, because I was excited about this product.  However, I couldn't find it... anywhere.  Apparently, these were not on shelves yet, at least in Decatur, AL!  I continued to look each week when I went grocery shopping.  I thought this would be a great addition to my son's lunchbox or after school snack options.

The cups come in three delicious flavors: Peach Mango, Apple Pear Watermelon, and Cherry Fruit Trio. They are a great source of Vitamin C and do not contain high fructose corn syrup or artificial flavors or sweeteners. Available nationwide now for a suggested retail price of $2.99 for four 4oz cups. 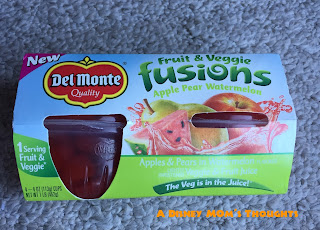 Then, it happened!  Last week while at the grocery store, I found Fruit & Veggie Fusions.  I grabbed the Apple Pear Watermelon pack and went on my way.  When I got home, we immediately tried this new snack.  We had been looking forward to it for weeks now! We were not disappointed! The fruit was soft, yet firm (not squishy as my 3 year old says, or slimy as my 6 year old says).   The flavor was sweet and tasty.  I would have never guessed there was vegetable juice in this snack!  We ate our pack at room temperature, but I realized later, I like it better after it's been chilled.  The only thing I didn't care for was opening it.  Each time I open it, I spill some.  The juice is exactly that, juice.  It sloshes out of the container each time I pull back the plastic film.  I have yet to pack this in my son's lunchbox because I know he'll make a huge mess at the lunchroom table.  We are saving these snacks for after school- so I can open it with as little mess as possible!

I do think these would make a great snack to take on a trip to Walt Disney World.  I'm always searching for great snacks to take into the parks and keep in our hotel room.  Having another option for good, healthy, easy foods is great!

Have you tried the new Fruit & Veggie Fusions from Del Monte? What did you think?
Posted by adisneymomsthoughts at 7:00 AM