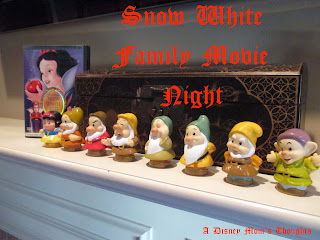 Movie #1 in our 2016 Resolution is Snow White and the Seven Dwarfs. I honestly can't remember the last time I saw this movie. C-man saw it in preschool and Big E had never seen it. We had a great time watching this movie together!  Big E really enjoyed it and C-man had a fun time connecting the movie to The Seven Dwarfs Mine Train at Walt Disney World!  He has not seen the movie since riding this roller coaster last May. 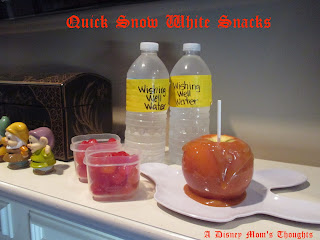 Prior to the movie, we put together a few "themed" snacks.  We tried to look for Ring Pops to represent the gems the dwarfs mined, but failed.  Instead, we bought Gushers fruit snacks.  The boys thought they were just the right shape and color to represent gems. We also made caramel dipped apples following the Kraft recipe. For a quick drink we had "Wishing Well Water."  If this were a party, I would have made cute, creative labels... but it wasn't so we used duct tape and a sharpie marker! :)  The funniest part was C-man wouldn't let any of us eat the gushers until the dwarfs were mining and we couldn't eat the apples until the Queen made the poison apple! 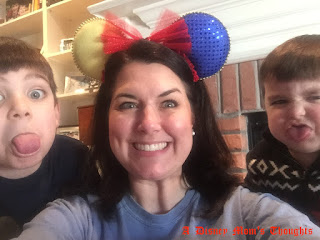 Following the movie, there were several cute comments:
1) "Did people really act this out or were they drawn?"  Um... drawn.
2) "The witch was a bad actor, even though she was drawn.  She really could have done a better job."
3) "So if Snow White was dead and buried in a glass coffin and then came back to life, is she a zombie now?"  Wow!  Crazy thought from a 6 year old!!

We look forward to our next movie night... Pinocchio!
Posted by adisneymomsthoughts at 6:30 AM