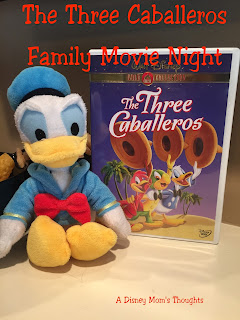 Movie #7 in our New Year's Resolution list was The Three Caballeros. This film premiered in Mexico City on December 21, 1944. It was released in the United States on February 3, 1945 and in the United Kingdom in March, 1945. This was the first time I had seen this movie all the way through. One thing that immediately stood out to me was the Birthday of Donald Duck. In the movie, Donald receives 3 presents from his friends in Latin America for his birthday on "Friday the 13th." I always thought Donald's birthday was June 9, 1934... so I did some research and found this on disney.wikia.com:


Donald's birthday is officially recognized as June 9,1934, the day his debut film was released, but in The Three Caballeros, his birthday is given as simply "Friday the 13th," while in Donald's Happy Birthday, it is elaborated to be March 13th.

Regardless of when Donald's birthday really is, this movie obviously reminded me of the Gran Fiesta Tour in the Mexico Pavilion at Epcot's World Showcase. Watching this movie will definitely make you appreciate this attraction more! 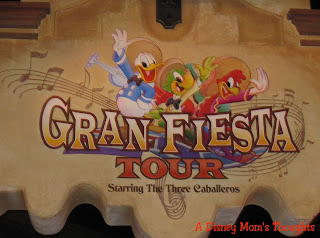 The Three Caballeros are Donald Duck, Jose Carioca, and Panchito.  Donald and Jose made appearances in Saludos Amigos too.  Panchito completed the Three Caballeros!  Here are their posters on the wall at Epcot prior to the Gran Fiesta Tour and in the opening credits of the movie.
There are so many fun things you can do to make this family movie night a success. Obviously, you can have a Mexican themed dinner with tacos and burritos. We didn't do a meal with our movie night, but we did have some good snacks! We went by a local Mexican restaurant and picked up warm chips and salsa. I looked all over town for churros, since they remind me of the Mexico pavilion at Epcot, but couldn't find any. We settled for cinnamon twists from Taco Bell! :) 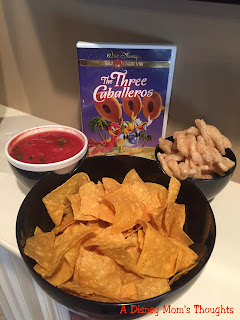 Other fun things you could do is make a Pinata, find a Mexican flag coloring sheet and learn about the history, make tissue paper flowers, or make sombrero cookies!

What would you do to make The Three Caballeros a fun family movie night for your family?
Posted by adisneymomsthoughts at 6:00 AM