I received free products, including the celebration kit, from Walt Disney World and MomSelect in order to host the Disney Kids Preschool Playdate. The opinions expressed here are my own. 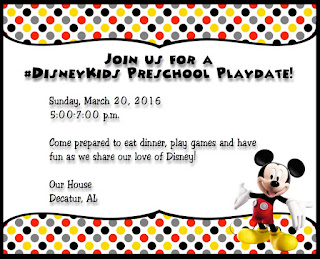 Last weekend we had the best time at our #DisneyKids Preschool Playdate! We invited several of our friends from the neighborhood and their families. After eating hamburgers, beans, fruit, chips and Nesquik milk (we pretended we were eating burgers from Cosmic Ray's Starlight Cafe) we had a fun time decorating our own Mickey Cone Cakes. Some of us chose Mickey Rice Krispy Treats! 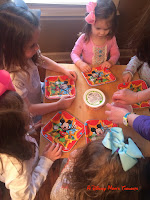 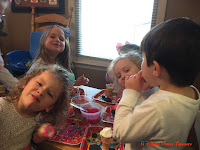 We had a big job of cleaning up ALL the sprinkles! 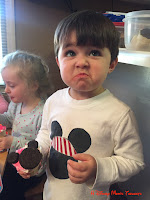 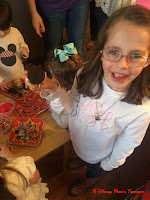 The cupcakes turned out great, even with Big E's "dog face"
that is present in most pictures these days! 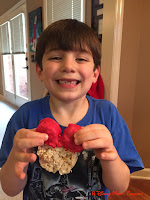 Some were too "big" to make a cupcake...

After eating dinner and dessert, it was time to PLAY! First, everyone got their Disney SWAG (and yes, I just learned that SWAG stands for Stuff We All Get)! 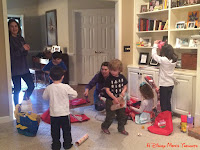 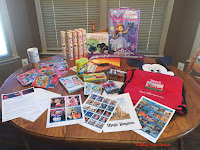 On the left, each child got a Disney Jr. drawstring bag, WDW preschool map, Sofia/ Jake reversible crown/ hat, Lion Guard poster, and Lion Guard tattoos.  On the right, are all the supplies, games, and SWAG I received.

Once everyone had their goodies, we had a Disney Easter Egg hunt. I found Princess and Mickey pre filled eggs at the store and filled others with Princess fruit snacks, pirate erasers, and plastic jewels. Everyone loved the hunt! 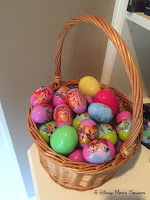 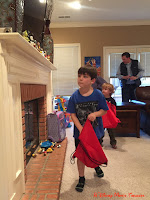 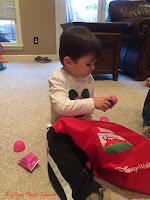 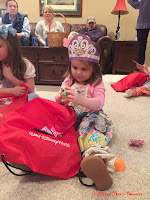 Following the hunt, the kids wanted to play with the various Disney items my son used to decorate for the party! We had our Jake Mighty Colossus Ship, Little People Mickey and Minnie House, Little People Snow White & the Seven Dwarves, Star Wars guys, Disney Jr. guys, and plenty of other Disney "guys". While I loved the "playing" and laughing, it was making me behind in my plans for the party! We missed out on making Disney Jr. puppets with our supplies from "I Love to Create." I guess that will have to happen on a different day.

After we played, we still had time for a few Disney games that were given to us in our party kit. Some played a Disney Matching Game and we found the charades game was too difficult for preschoolers to understand! We finally ended with several rounds of "Disney Bingo" where we used the Kilimanjaro Animals and Pirate Erasers at prizes. 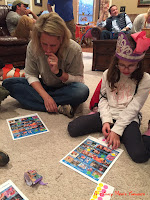 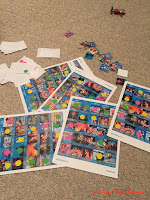 Overall, we had a fabulous time! The kids had fun playing while the parents were able to sit back and enjoy each other as well. It's always fun to have friends over but even more fun when you get to share Disney with them! 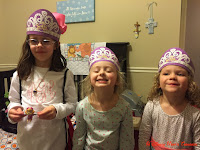 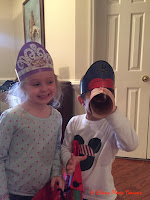 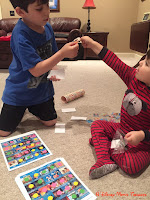 After everyone left, we had three more rousing games of Disney Bingo!

Thank you to all the #Disney Preschool Playdate Parters: HP, "I Love to Create", Banfield Pet Hospital, Glad, all, and Nesquik. A special thanks to Walt Disney World for this opportunity!

I received free products, including the celebration kit, from Walt Disney World and MomSelect in order to host the Disney Kids Preschool Playdate. The opinions expressed here are my own.
Posted by adisneymomsthoughts at 11:56 AM