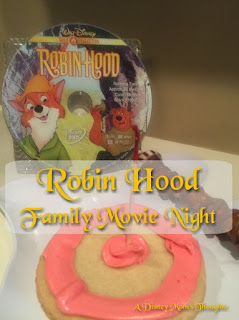 Robin Hood was our next movie in our 2016 New Year's Movie Resolution.  We actually watched this movie and had our movie night way back in June of 2016. This movie was released by Walt Disney Studios on November 8, 1973. My mom was actually pregnant with me when this came out! I vaguely remember seeing this movie as a child. I think I remember the book more than the movie.

My boys were familiar with the music because we have several of these songs on a Disney Movies CD we listen to in the car. Robin Hood was such a fun movie for my boys. My oldest had seen it but this was the first viewing for my youngest. Of course, they like the "bad guys" and want to shoot arrows. I knew this would be the case, so for our snack we had arrows and targets! 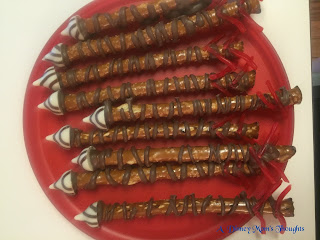 The arrows were fairly simple to make. Using a large pretzel rod, chocolate wafers, Hershey's Hugs, and pull apart Twizzlers.  I melted the chocolate wafers and put them in a sandwich bag with a small part of the corner clipped off to have a make shift icing bag. I added a "dollop" of chocolate on the end of the pretzel to attach the Hershey's Hug which was the arrowhead. Then made a zig zag pattern down the pretzel shaft and my son added the Twizzler pieces to the end for the fletching.  These were a hit. 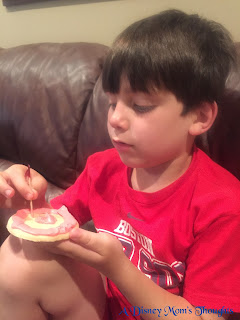 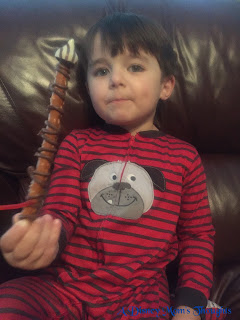 For the target, we used sugar cookies and icing. I tried to make red, but it came out pink! Oh well!  I used a traditional flat icing tip to make the circles on the cookie.  Of course the boys wanted in on this too, so some looked better than others!  We then used a party toothpick with the colored plastic on the end to represent the arrow in the target.

It was a fun night of baking, eating, watching, and laughing together.
Posted by adisneymomsthoughts at 9:44 AM