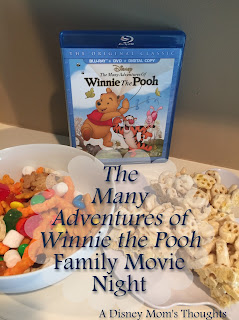 The Many Adventures of Winnie the Pooh was released on March 11, 1977 by Walt Disney Studios. The first time I saw this movie was June 11, 2016. Almost 40 years after it was released. After watching it, I know why it took almost 40 years. I didn't like it. My boys didn't like it. But, we pushed through it and finished it so we could say we did it.

This movie is several small stories about the adventures the characters take together. While I love the characters (in the movie, in the parks, and as stuffed animals) and we enjoy the books, none of us cared for the movie. I feel guilty for this because Pooh is so lovable, Piglet is so innocent and Tigger is so fun. Oh well. We made memories and had great snacks together! 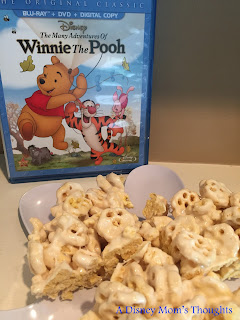 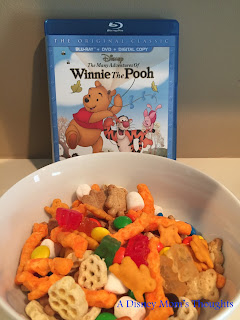 For our snacks, we had Pooh's honeycomb. I basically made Rice Krispy treats but substituted Honeycomb cereal for the Rice Krispies. Our second snack was Pooh's mix.  This mix had the following: 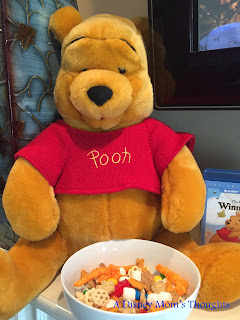 Even Pooh himself approved of our snack!

How do you feel about the Winnie the Pooh movies? I'd love to hear in the comments!
Posted by adisneymomsthoughts at 6:00 AM